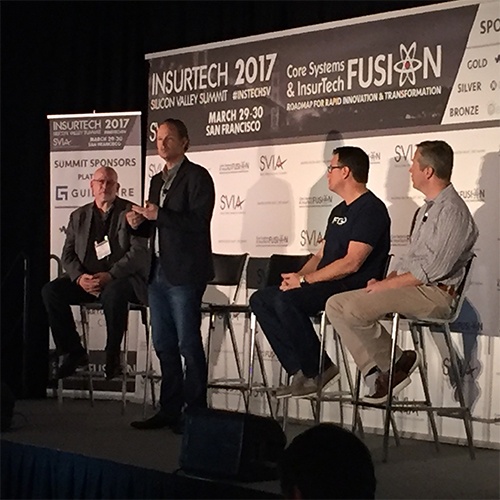 While it’s clear that the insurtech movement is a force to be reckoned with, the long-term results of the collaboration between innovation, technology start-ups and insurers remains to be seen. On the bright side, factions from both sides share the same goal: to embrace modern technologies, disruption and innovation in order to facilitate improvements in how insurers do business. This is ever more critical now, as consumers grow to expect the same type of customized, yet streamlined services from their insurers that their retail establishments offer them. In short, insurers have their share of challenges ahead when it comes to putting the customer first (rather than the product), yet some are understandably hesitant to overhaul their systems in order to adopt an insurtech mindset and culture.

This was the overarching message at two recent events, the Silicon Valley Insurance Accelerator event held in late March and the PCI Tech annual conference, held in early April.

At the SVIA event, we discussed building a roadmap for next generation innovation, and the importance of transforming the insurance business using insurtech building blocks. For insurers, this roadmap comprises the ultimate platform by which they conduct business, and alignment (read integration) of business units across this platform is the first step.  Attendees at SVIA agreed that cloud is now an imperative to that platform, and will serve as the catalyst for further improvements within the insurer’s operations, such as working with key partners and improving the distribution network’s performance.

A similar message permeated PCI Tech, where the discussion centered around how insurers can use digital solutions to transform their operations in such a way as to become true distribution companies. Unlike the long-term results mentioned above that remain to be seen, the benefits of insurtech collaboration are already evident, particularly with carriers that are using modern technologies to be able to shift and expand channels. Some are going direct, some are partnering with non-typical distribution channels, and some are partnering with other carriers, transforming themselves into an MGA, for example, to be able to meet the needs of customers otherwise lost to the competition.  No matter what strategy is taken, insurtech’s contribution to distribution is at the heart of the insurer’s ability to grow and be successful.

Meanwhile, savvy insurers are applying the “customer first” scenario I mentioned earlier to the entire distribution network, and leveraging insurtech innovation, are finding better ways to manage all aspects of customer interactions, from direct-to-consumer self-service to licensing, onboarding, compensation and more. In this example, insurtech innovation delivers its ultimate value to core systems, where just one modern solution can tie together core functions such as policy admin, underwriting, claims and billing and payments, CRM, agency management and data analytics.

At both of these important meetings, attendees were challenged to imagine that all core systems are reframed in an insurtech environment.  This transformation is possible!  And with the right platform and single solution, insurers will see both short- and long-term results, making them a formidable competitor against present and future disruptors.

Chris Ewing is the President, CEO, & Co-Founder of One Inc.