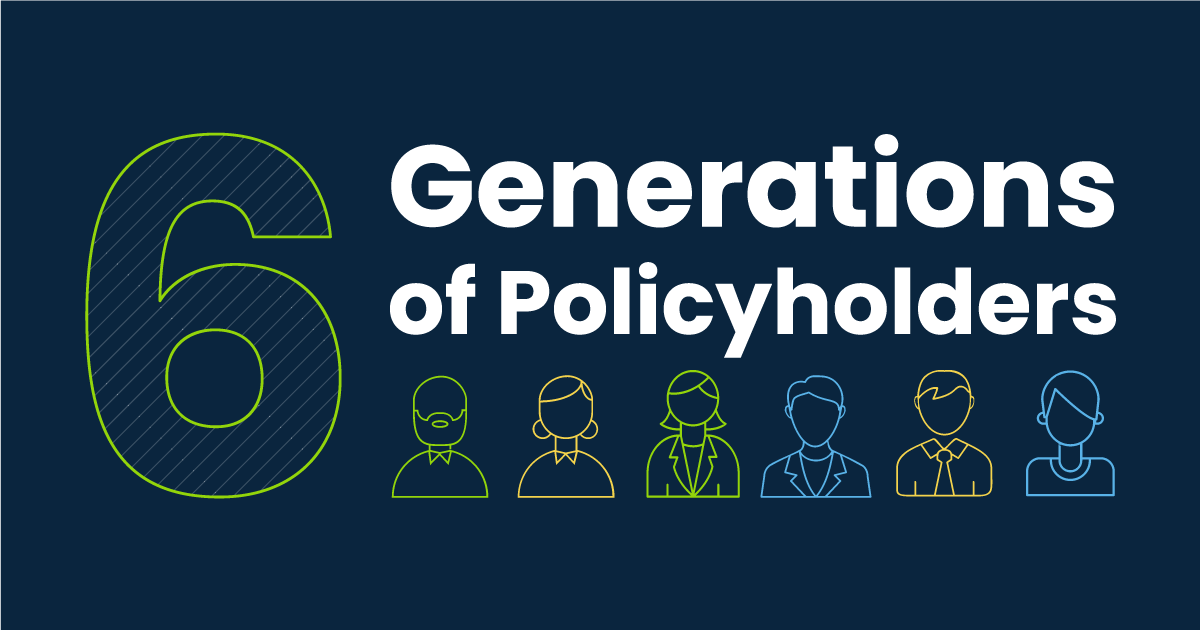 Generational shifts have forced insurers to rethink the traditional one-size-fits-all approach to insurance. Here is a brief overview of the consumer attributes associated with each generation of policyholders, along with their respective age ranges, as defined by Pew Research in 2019.

These 7- to 22-year-olds make up 25% of the U.S. population, and they’re already creating quite the splash as a consumer group. Globally, Gen Z accounts for $143 billion in spending, and they influence $600 billion in family purchases. By next year (2020), they’re expected to comprise 40% of all consumers.

Even with money to spend, this generation has high standards for their chosen brands. They prefer companies that are environmentally and socially conscious, and they are more likely to follow brands that emphasize digital engagement (particularly on mobile) and video  marketing.

Thanks to social media and smart phones, Gen Zs are highly connected with their peers. As such, personal references and online reviews have the greatest influence over their choice of insurance providers.

Don’t yet their youth fool you. This newest generation of consumers has tremendous savvy and purchasing power, and they’re not afraid to use it.

Spanning their 20s and 30s, Millennials  have proven themselves as a force to be reckoned with. Their collective lifetime spending power is estimated at $10 trillion, and they’re determined to align their expenditures with their principles.

A popular discussion topic among economists, social scholars, and casual observers alike, this generation has endured years of unrelenting scrutiny, with a famously dichotomous reputation between admirers and critics. Innovators vs. freeloaders; minimalists vs. overly indulged; socially conscious vs. distracted. And the list goes on.

Millennials have learned to tune out the baseless stereotypes in order to focus their energy on positive pursuits and their indisputable values. They are all about collaboration, social ties, “digital first” experiences, adventure, and authenticity. This progressive generation is determined to make a mark on the world. Insurers are wise to pay attention.

Legend has is that Gen X is so-named for being the “forgotten generation.” The proverbial middle child, overlooked in favor of the more conspicuous Boomers and Millennials. While this diverse generation may have evaded stereotype, these 39- to 54-year-olds have been quietly shaping the consumer landscape for decades.

Despite their relatively small population, Gen X earns 31% of the total U.S. income. They occupy powerful career positions with a strong influence on corporate purchases, and they’re responsible for over half of all startups. With the largest disposable income, Gen X outspends all other generations.

Financially and digitally savvy, with money to spend and a healthy sense of skepticism, brands must earn – and keep earning – the trust and patronage from this small-but-mighty generation.

At age 55 – 73, Boomers have finally earned the right to drop the word “Baby” from their title. Characterized by exceptional work ethic and loyalty, over half of all employment gains in 2018 were made by workers over the age of 55. Even with a rate of 10,000 new retirees per day, Boomers continue to play an active role in U.S. business and economy.

While they may not be “digital natives,” Boomers have embraced technology. With 96% using search engines, 95% on email, and 92% shopping for products and services online, they appreciate the modern customer experience as much as the next generation, and should not be discounted when building your digital strategy.

If you need further proof of their digital inclination, let’s not forget that Bill Gates, Steve Jobs, and Steve Wozniak are all part of the Boomer generation.

Age 74 – 91 ain’t what it used to be. Today’s 74-plus-year-olds are active, resourceful, and determined to continue making valuable contributions to society. With a population 20 million strong, the Silent Generation is still a formidable consumer group, controlling approximately $24 trillion of the nation’s wealth. They tend to prefer bigger brand names, and they value simplicity, economic prudence, and hard work.

The so-called “Silent” Generation has made a huge impact on the world we know today. They survived multiple wars, as well as the economic roller coaster of the past century. They participated in massive social change, including the civil rights movement of the 1960s (Martin Luther King, Jr. was part of this generation). They also helped shape 20th century pop culture, producing legends in rock n’ roll, film-making, and comedy.

They may not have the digital instincts of their younger counterparts, but they are far from the technophobes some may presume. This age-group doesn't scare easily, and they're certainly not afraid of a little change.

According to a 2015 poll by Knoema, we have plenty of men and women in their 90s+ in the United States – 3.79 million, to be exact – who have seen a century’s worth of progress and peril.

While they’re much more renowned for their WWII heroism than their digital prowess, the Greatest Generation has lived through enormous leaps in technology throughout their years. They’ve seen the nation's widespread adoption of electricity, automobiles, commercial flights, and televisions. And yes, they were also there for the advent of personal computers, the internet, and mobile phones.

This generation is not adverse to progress. However, they're generally happy to leave the newfangled digital gadgets to the youths under 92.

But don’t forget, many of these seniors have help from their children, grandchildren, and even great-grandchildren. So when you consider reaching out to our oldest and Greatest Generation, also consider who is doing the research, shopping, and decision-making for their purchases.

So there you have it. Six generations of consumers. Obviously, these are just broad generalizations, and you will find exceptions to every rule. Understanding each generation is important when creating a digital plan that is attractive to newer policyholders, without alienating your established customer base.

A common theme among all age-groups is their willingness to embrace progress. If you can continue to offer a positive experience to your customers on their level, you create loyal brand advocates that will keep your company sound and competitive well into future generations.

Find out how you can start using digital solutions to keep your current customers happy and attract the newest generation of policyholders.

Check out the generational timeline as defined by Pew Research 2019: